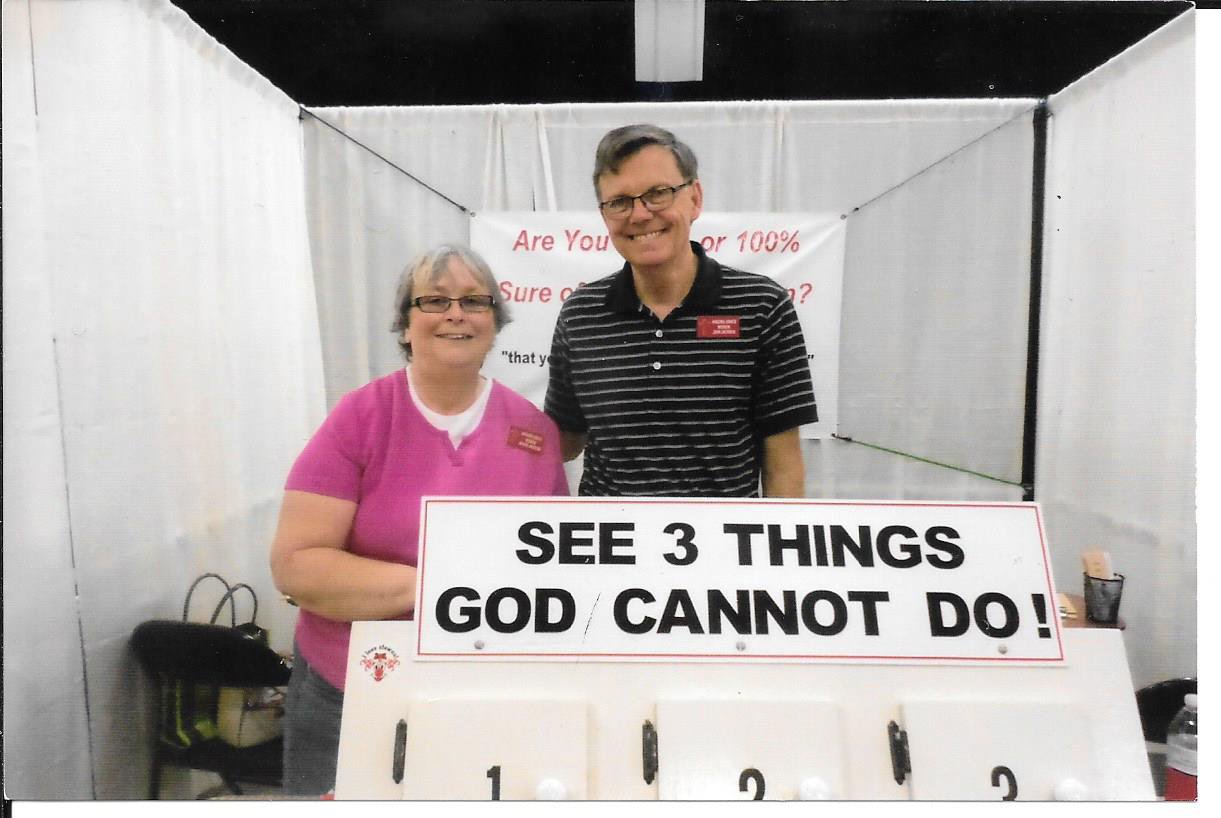 Give to the Ministry of John & Debbie

Family life: 4 children, 1 daughter - Leah (graduated from Champion Baptist College and Liberty University with a masters in Elementary education.) son-in-law Ray and are blessed with four beautiful grandchildren, two girls and two boys, who keep us busy when we are home from the fairs!!

Our personal testimony is: Debbie and I were both brought up in Church. It wasn't until we were adults that we heard a clear presentation of the Gospel. I was saved on campus at Chapel Hill and Debbie received Christ as her savior after her pastor asked her if she was 100% sure she was going to heaven and she said no!!

Our Testimony of my involvement with AGM: Because Debbie and I were both religious but lost, we know that there are so many people like us!! They are religious, but lost as we were. We want to have a part in helping them know how to get to heaven as well. AGM is the perfect ministry to help us do that!!

Our Mission verse is Romans 10:13,14: "For whosoever shall call upon the name of the Lord shall be saved." How then shall they call on him in whom they have not heard? And how shall they hear without a preacher?

Debbie and I would like to introduce ourselves to you! Debbie grew up in Woodruff, SC. She was reared in church and believed she was saved until she heard a clear presentation of the Gospel at the age of 21. The Pastor asked her if she was 100% sure that she was going to heaven and she said no!! Later that night at home she asked Christ to be her Saviour!!

I (John) also grew up going to church in a small town in North Carolina, but I did not understand what true salvation was all about until I went to a Bible study while I was in college. I was so impressed by the guy leading the study that I want to another meeting and was blown away by the salvation testimonies of of some students. I wanted what they had received Christ as may Saviour. Both of us had grown up religious, but spiritually we were lost!

Through the years, we have discipled others, shared our faith, and served in many different was in our local church. After retirement, we prayed about what God had for us next. We moved to western North Carolina in 2006 and became involved with Temple Baptist Church in Asheville. Soon after joining this church, they announced that Amazing Grace Mission was going to have a soul winning booth at a local fair. Debbie and I both signed up to work at the booth, and were blessed to lead several people to the Lord. After this experience , we began to pray about becoming missionaries with Amazing Grace Mission. Since we both grew up religious and were lost, we knew that there must be many people that are still in the same condition as we were. Our desire to witness to lost religious people and others led us to join Amazing Grace Mission. This is the perfect ministry to help us tell any lost person how they can be saved and be 100% sure that they will go to heaven.

We worked the soul winning booth in several fairs and festivals in 2007 and officially joined Amazing Grace Mission in January 2008. Since they we have been actively sharing the Gospel through this soul winning ministry.

Thanks you for your interest in our ministry.